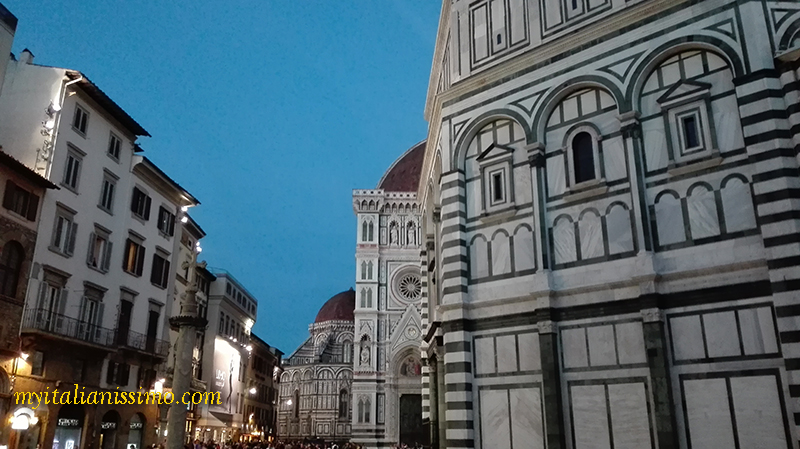 “The artist sees what nature hides”,

The Fabbriceria della Cattedrale di Firenze (Florence Cathedral Works) has served as working and storage space since the Middle Ages. Founded in 1296 by the Florentine Republic, it is known today as the Opera di Santa Maria del Fiore. This is where the world’s greatest collection of Florentine medieval and Renaissance sculpture has been preserved for over 700 years. It boasts masterpieces from the era’s major artists. It was here that Michelangelo carved the David, originally commissioned for the Duomo.

Since its opening to public in 1891 the museum has grown in size. The most recent transformation took place between 2010-2015. Now 750 artworks by masters from Donatello to Michelangelo can be admired here. 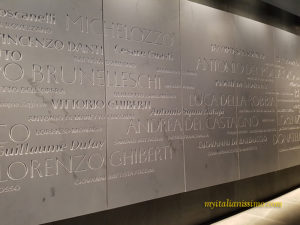 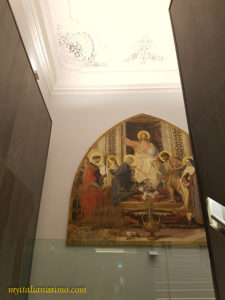 The museum is six thousand square metres. The exhibition itinerary has been aligned with the large marble and bronze decorations from the Cathedral of Santa Maria del Fiore, the Bell Tower and the Baptistery. 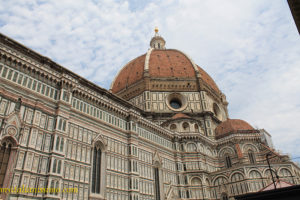 “The citizens agreed to rebuild the main church of Florence, which looked small for so great a city. And so they ordered to make it grander in size and exterior adornment, all in marble and with carved figures… The church would be big enough to outshine any other building built so far, so that men could never create anything bigger or more beautiful.” – Giovanni Villani 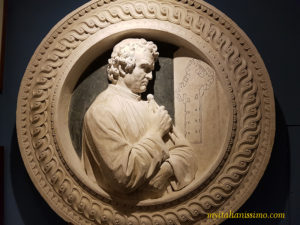 The building work was assigned to Arnolfo Di Cambio, who managed to complete the two aisles and part of the façade. Giotto designed the bell tower, and the whole project was crowned by Filippo Brunelleschi‘s gigantic dome, which took only sixteen years to complete (1420-1436). Brunelleschi originally envisaged the dome reinforced with mosaic decoration on the inside, but it was later frescoed by Giorgio Vasari,  who created the largest fresco at that time (1572-1579), of more than 3600 m2.

The Museum houses: the originals of many sculptural elements of the Cathedral complex, such as statues and decoration from Di Cambio’s original, unfinished façade with its giant, full-scale model. 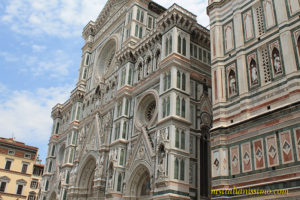 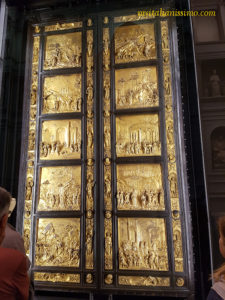 On the opposite side, the ten panels of Lorenzo Ghiberti’s Gates of Paradise (1425-1452), which in July 1452 obtained the place of honour right in front of the Duomo. Michelangelo gave the masterwork this name for its gilded beauty. 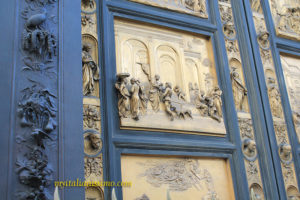 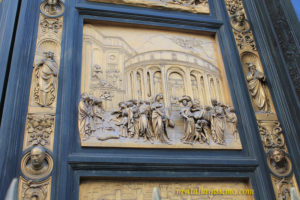 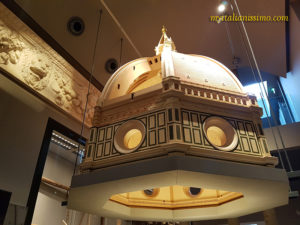 And then: wooden models of the dome, different design plans for the beautiful façade developed over the centuries, liturgical vestments, as well as the second of Michelangelo’s three Pietàs, one of his most mysterious works, which may have been intended to go on the sculptor’s tomb; he once famously tried to destroy it with a hammer. There’s also the beautiful Penitent Magdalene by Donatello, an older and suffering woman with a tender gaze. 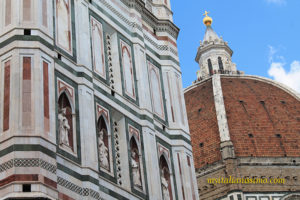 In the Gallery of Giotto’s Belltower, you’ll find 16 larger-than-life statues (including the renowned three Prophets by Donatello), as well as the 54 scenes that adorned the belltower, which most consistent part saw Andrea Pisano at work, as mentioned in my previous post about this marvellous cathedral. 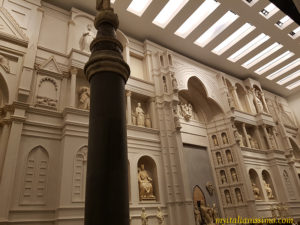 The Sala del Paradiso, the museum’s main hall, literally takes your breath away. Before the dismantlement of the unfinished medieval façade in 1587, the Florentine Paradise (the area between the Baptistery and the Cathedral) had been the richest decorated piazza in Europe. If you stand in the middle of the room, you can grasp the whole effect of the façade reconstructed here on the basis of a 16th-century drawing . 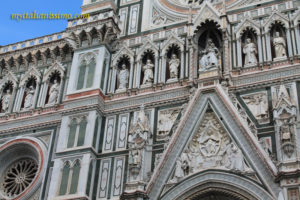 Over the centuries entire generations of artists, workers and artisans succeeded on each other. They dedicated their lives to this project, knowing they would never be able to see its conclusion. Today, men and women at the Opera del Duomo continue working on the project with the same pride of their predecetors.

Opening times: every day from 9am – 7pm

Entry: an all-inclusive ticket admits you to the Museum, the Baptistery, Giotto’s Belltower, Brunelleschi’s Dome and the Crypt of Santa Reparata, €15.

The visit ends with a panoramic terrace that offers a breathtaking view of Brunelleschi’s dome and the rooftops of Florence.