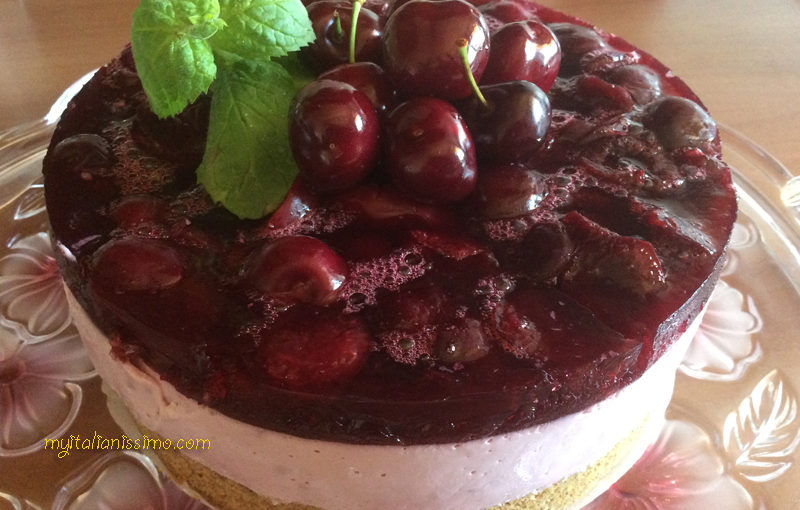 This is how to whip up a yummy no-bake cheesecake. Fresh cherries, a crunchy biscuit base and smooth cream cheese filling make a delicious summer dessert.

Crush the biscuits and mix in the butter (melted at room temperature), line the base of a 18 cm round springform tin with greaseproof paper, and push the biscuit mixture into an even layer into the base of the tin. Chill for 15 min.

Soak 8 g gelatin sheets in a bowl of iced water for 10 min. In a small saucepan heat slowly 3 tbsp cherry syrup, turn the heat off, lift the gelatin sheets from the water, wring gently, and whisk in until dissolved.

In a separate bowl use an electric whisk to combine soft cheeses with icing sugar and the gelatin syrup mixture, until completely combined. Add 120 g cherries. Form a layer on top of the biscuit base and let set in the freezer for 1 hour.

Finally, place 230 g cherries into a saucepan, add sugar, 3 tbsp cherry syrup and 2 tbsp water. Stir over medium heat without bringing to boil. Remove from the heat. Add 8 g gelatin (soaked beforehand in the iced water and then wringed out), stir just until the gelatin dissolves. Let cool at room temperature. Tip the mix on top of the cake, smooth over the top, and refrigerate until firm, at least 4 hours.

To serve, remove from tin, decorate with some cherries and mint leaves. 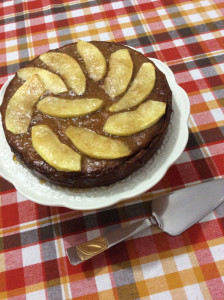 If you haven’t already, it is high time to get in the mood for autumn! And if you like mushrooms as much as I do, you can’t go wrong with this recipe. Serves 4. 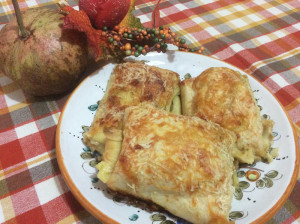 Place the beaten eggs and the flour into a large bowl and mix well. Gradually whisk in the milk until your batter gets the right consistency. Add 1 spoon of oil, a pinch of salt and a dash of pepper, cover and let it rest in the fridge for 30 minutes.

Heat a frying pan, butter it a bit each time you add a ladleful of the batter, and fry until golden on both sides, turning with a fish slice.

Clean and chop the shallots, simmer for 2-3 minutes in a frying pan with 1 spoon of olive oil. Add the sliced mushrooms, then the seasoning, stir and cook slowly in a covered pan for 10 minutes.

For your besciamella sauce: melt the remaining butter, work in the flour, add milk and cook until thick, stirring briskly, season with salt and grated nutmeg. Add half of this sauce to the mushrooms, along with the diced Taleggio cheese, 1 egg, and one-third of Parmigiano.

Put a tablespoon of filling centrally on each pancake, fold into envelopes, and place in a buttered ovenproof dish, cover with remaining sauce, sprinkle with remaining Parmigiano, and bake in a pre-heated oven at 180C for 20 minutes until golden brown. 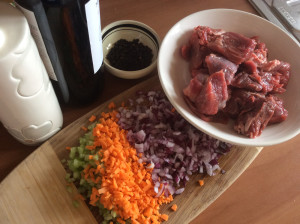 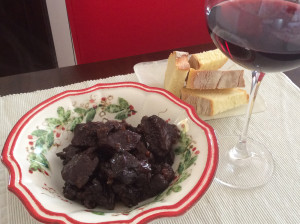 Learn how to make the perfect Peposo, Brunelleschi’s favourite. Don’t be scared off by the amount of pepper in this recipe, the peppery aroma will permeate the kitchen and the diners’ soul.

Heat 3-4 tablespoons olive oil in a large heavy-based frying pan and saute the finely chopped carrot, celery and onion. Add the beef cubes, the peppercorns and season with salt. Cook for 20 mins. Then cover with Chianti wine, reduce the heat, put a lid on and cook for about an hour, until the meat is soft.

You can serve Il Peposo with croutons or polenta, and accompany it with a glass of Tuscan red wine. Buon appetito!