Val d’Elsa… there’s something seductively charming about this area, full of humble but beautiful hill towns with quite a few TCI orange flags on the way, immersed in the picturesque surroundings. It’s quintessential Tuscany at its best. I would certainly recommend a drive through this beautiful countryside, as this will give you an opportunity to explore the area at your own leisure. 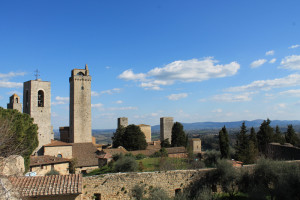 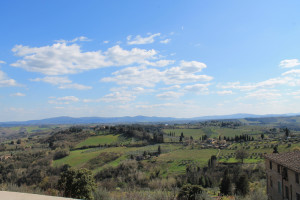 San Gimignano is a one-of-a-kind hilltop town in the province of Siena, spiked with fine medieval towers, or rather – medieval skyscrapers. They really form an unforgettable skyline, for which it is known internationally. 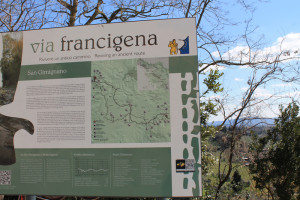 In 998 San Gimignano was still a village along the Via Francigena and belonged to the bishop of Volterra. In High Middle Ages The Franciscan Trail became the route of Catholic pilgrims who travelled to Rome, and the town of San Gimignano was one of the most important transit and stopping points. In 1199 the town gained its independence from the bishops of Volterra and established a podestà. 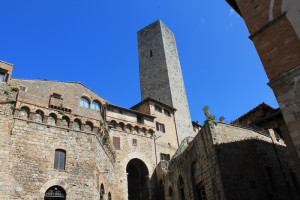 Today we can admire 16 of the 72 towers of the thirteenth century, when every well off family would build a stout tower. In medieval times the tower was the higher symbol of power. The house served a defensive function. Workshops occupied the ground floor: this is where they would have had a store. Then there were bedrooms on the first floor, and the higher level consisted of the kitchen, following security rules, as this was the place where the fire was usually lit. There was no interior staircase, so ladders and rope-ladders were used to get inside and reach the upper floors. The front door was narrow and no one wearing armour could possibly enter.

Palazzo Comunale, built between 1289 and 1298, is one of the most ancient public buildings in Tuscany. It offers gorgeous views (of the town and the whole Val d’Elsa region) from its 54-metre-high tower – La Torre Grossa – San Gimignano’s highest tower. The two upper floors house the town museums: you can visit the Palazzo, the Picture Gallery, the famous room ‘Sala di Dante‘ (where the poet in his role of ambassador of the Guelph League in Tuscany was hosted in 1300), and finally, admire the courtly frescoes and prestigious works by the great Sienese and Florentine artists dating back to the 13th and 17th centuries.

The Romanesque Duomo is a temple of faith and art. The cathedral’s highlight are the walls, entirely lined with frescoed scenes of the Old and New Testament by Bartolo di Fredi and Lippo and Federico Memmi. They are truly beautiful. And so is the famous Chapel of St. Fina, featuring Domenico Ghirlandaio’s frescoes. The chapel was built in 1468 and houses the shrine of the saint born in San Gimignano in 1238. 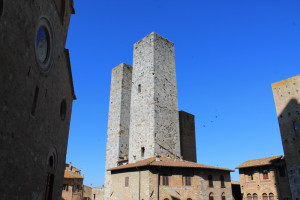 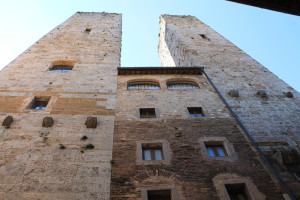 The “Twin” towers, erected by the Salvucci family to bypass the Communal Statutes of 1255, according to which no tower in town could be higher than the Podestà’s Tower Rognosa. But the two towers, if put together, were definitely higher! 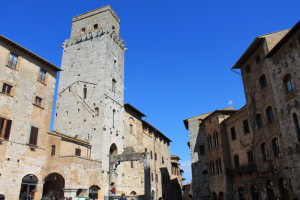 Piazza della Cisterna, a building-lined triangle, with an octagonal travertine well (that gives the name to the square) and redbrick pavement with irregular triangular patterns. 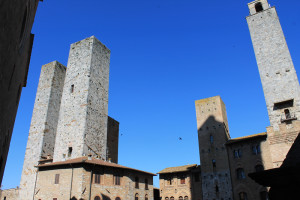 Salvucci Towers, Palazzo Podestà with its huge arched loggia and La Torre Rognosa (51 metres high). In 1298 the podestà moved to the new Palace, while this building was used as a hotel for distinguished guests. 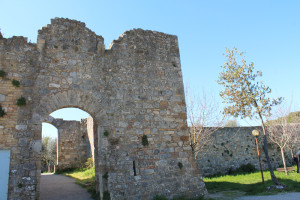 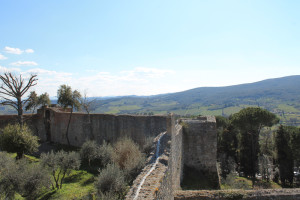 Rocca di Montestaffoli, a beautiful place. Its only turret open to visitors offers unforgettable views, of both the town’s skyline and gorgeous countryside. 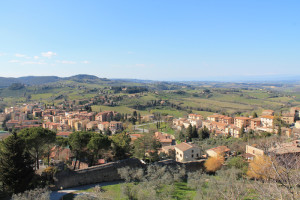 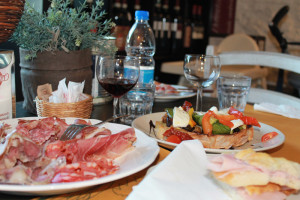 Savouring local produce at Caffè Giardino in Viale Roma 17: here you can taste typical Tuscan dishes, coldcuts, cheeses, wine, as well as pasta, salads and homemade schiacciata, all of this accompanied with a stunning view!

Of course, no visit to San Gimignano is complete without trying its famous wine. Vernaccia di San Gimignano DOCG is one of the best white wines in Italy, said to inspire popes and poets. Its typical straw-yellow colour with golden nuances and an elegant and delicate bouquet is a journey through the wine of San Gimignano, produced from the ancient variety of Vernaccia grapes which grow on the sandstone hillsides of the area. 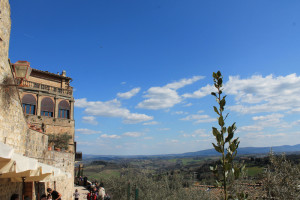 On the town’s festive calendar is The Ferie Delle Messi, an annual medieval festival held on the third weekend of June. 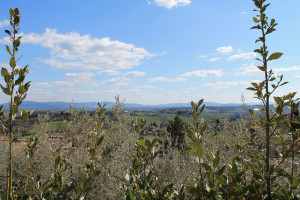 Another brilliant example of medieval architecture in the area is Monteriggioni. Erected to keep the powerful neighbours of the Florentine Republic at a safe distance from Siena, its fifteen towers and the encircling walls are the symbol of its former power. 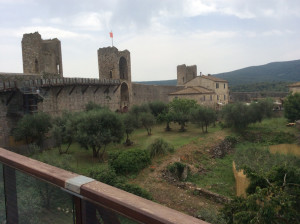 Today, walking down the main street that connects the two gates – La Porta Fiorentina and La Porta Romana – means uncovering legends and panoramas of the past, when the town represented the Sienese gate into the Elsa valley. 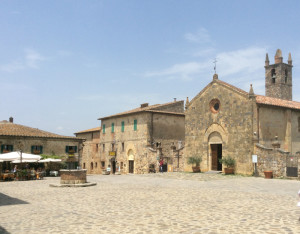 Piazza Roma lit by the sun, where vines and olive trees fill the area with gentle twinings. 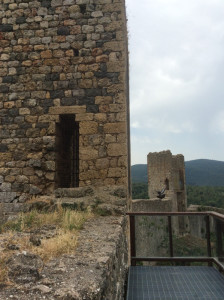 Walkways along the top of the castle walls with its original 13th-century architectural features, which are oh-so-familiar to all the passionate fans of Ubisoft’s Assassin’s Creed II and Assassin’s Creed: Brotherhood.

Despite the passing of the centuries, both San Gimignano and Monteriggioni managed to preserve their medieval architecture and charm, able to impress the travellers so deeply.