Park your car in Piazzale Ferri and take a stroll in the town streets that bear a Tuscan resemblance rather than an Umbrian one, this thanks to the Vitelli family, who lived here in the 15th and 16th centuries. The town centre is surrounded by the old town walls dating back to the 12th century. The Renaissance had a very strong influence on the architecture here. The town boasts many works by major artists of that time. (You can get a free guidebook from the Tourist Information Office in Corso Cavour.)

The Cathedral rises on the ruins of an old temple built by Pliny the Younger in the 1st century AD. It is dedicated to St. Florido (the patron saint) and St. Amantius, who rebuilt the town after a siege by the Goths in 542. 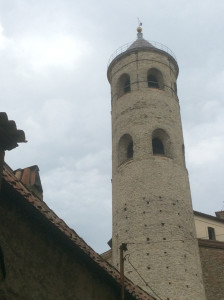 The Round Bell Tower, one of the symbols of Città di Castello, dates back to the 11th century. It is 43,5 metres high with a diameter of 7 metres. 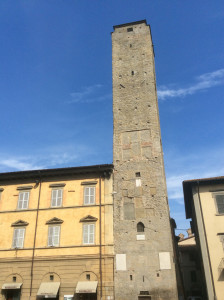 The Civic Tower (or the Bishop’s Tower) built in 1300  used to be a prison for a long time.

Palazzo dei Priori (now the Town Hall) is one of the most famous public buildings in Umbria, built between 1322 – 1338, and boasts the town coat of arms carved over the main door and the architect’s name – Angelo da Orvieto – visible on the lintel.

Palazzo del Podestà, completed in 1368, with two-mullioned windows and decorative coats of arms of podestas who governed the town. 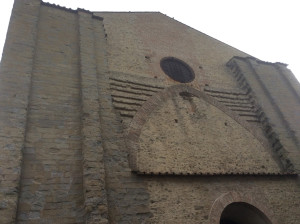 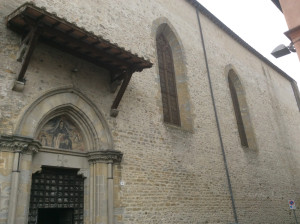 The neo-gothic Church of San Domenico, where Raphael painted the Mond Crucifixion, 1503, now in the National Gallery, London.

Walk down the street to get to Pinacoteca Comunale, which found a home in the beautiful rooms of the 16th-century Palazzo Vitelli alla Cannoniera with its fine sgraffito decorations on the palace façade, carried out by Cristofano Gherardi using Giorgio Vasari’s drawings. Sgraffito played an important role during the years of the Renaissance in Italy.

This Picture Gallery is the second largest museum in Umbria, after the National Gallery in Perugia. Here you can admire the Martyrdom of St Sebastian by Luca Signorelli (1498), The Holy Trinity by the young Raphael (1499), the Coronation of the Virgin by Domenico Ghirlandaio (1486), as well as the collection of ceramics by the Della Robbia family. Entry ticket € 6, closed on Mondays.

The Vitelli were the main political protagonists in town. The family built five beautiful palaces in Città di Castello in the 15th and 16th centuries. Here is Palazzo Vitelli a Sant’Egidio and the park, which once used to be a splendid Italian garden.

Niccolò Vitelli imposed his authority in the 15th century. Four of his sons – Giovanni, Camillo, Paolo and Vitellozzo – became skillful and clever captains of fortune, whereas another son, Giulio, was the bishop of the town until 1530. All of them continued their father’s economic and military strategies, as well as cultural ideas, thus granting Città di Castello a period of great prosperity.

The Church of St. Francis, in Piazza Raffaello Sanzio, which hosts a copy of the Marriage of the Virgin by Raphael (1504, the original painting is now in Brera Picture Gallery, Milan), and the Vitelli Chapel designed by Giorgio Vasari in the mid 1500’s.

An immense artistic heritage preserved within the ancient town walls and in the museums, where lots of masterpieces are on display, tells us what life was like in the Tifernum Tiberium from its very early history to modern times.

During the first November weekend a truffle fair takes place in Città di Castello. It’s one of the most important fairs dedicated to this delicacy, the Umbrian Gold.